A.A. BONDY – WHEN THE DEVIL’S LOOSE 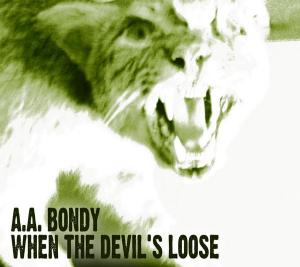 A.A. Bondy is set to release his sophomore album, When the Devil’s Loose via Fat Possum Records on September 1, 2009 and the entire album flows skillfully together and the track listing order is flawless with each song seamlessly feeding into the next.

The album starts off with ‘Mightiest of Guns’ which is gentle guitar playing accompanied by the tranquil vocals by A.A. Bondy, a simple way to start off the album yet the song will peak anyone’s interest to give further listen to the album. The full band joins in on the next track and accompanies for most of the remaining songs which is a departure from his debut album American Hearts where A.A. Bondy did the stripped down guitar kind of album.

The title track ‘When the Devils Loose’ is plausibly his best work on the album, the song is 4 minutes long yet I found myself wanting it to go on longer, the subtle mounting of the tempo in the chorus and the string instruments accompanying the band was a pleasant touch. ‘The Mercy Wheel’ is another stand out track that builds up the tempo to release it into calmness, nothing flashy just real Americana music at its best. Listening to the album I almost feel as if I have to do it twice because the first time around the music is so enchanting I forget to even listen to the lyrics.

A.A. Bondy’s music is bold in a subtle way, he plays the songs he creates and does not try to be any other artist but himself. He is about to embark on a headling tour and trust me, he is better live than recorded so make sure to check out his music live.