Next Tuesday the 18th marks the street date of Social Distortion’s latest release Hard Times & Nursery Rhymes but you don’t have to wait! Head over to socialdistortion.com now and stream the entire album for free. With every 100k streams, the price of the album will drop $1 on Amazon.com. It can go as low as $7.99 – but only if you stream! You control the price! Head over to the page, check out the record and tell your friends. Share on Facebook or Twitter from the page and automatically be entered to win a signed Epiphone guitar from Social Distortion.

Motion City Soundtrack are thrilled to announce that they’ll be joining Weezer this December for some select live shows! Kicking off in Chicago December 1st at the Aragon Ballroom, this run will see MCS playing dates in the Midwest and along the East Coast with the like-minded pop rockers. Before heading out on this short trek, Motion City Soundtrack will play to hometown fans and friends at a sold out Triple Rock Social Club show on Halloween Eve aka Mischief night. And directly following the Weezer dates, MCS will return to Chicago for a sold out exclusive three night stand at Lincoln Hall where the band will perform their first three albums in their entirety over three separate nights – I AM THE MOVIE on December 18th, COMMIT THIS TO MEMORY on December 19th, and EVEN IF IT KILLS ME on December 20th.

In the meantime, check out www.motioncitysoundtrack.com for new music and more.

Tagged as Commit This To Memory, Epitaph Records, Estrella, Estrella Online, Even If It Kills Me, I Am The Movie, Jack's Mannequin, Motion City Soundtrack, Weezer

Motion City Soundtrack are giving fans a holiday season treat this year when they spend three nights at Chicago’s newest venue – Lincoln Hall – in December. The band will be taking a look back at their seven year career when they perform their first three albums in their entirety over three separate nights – I Am the Movie on the 18th, Commit This to Memory on the 19th and Even if it Kills Me on the 20th. Tickets will go on sale on Friday October 23rd at 12pm and fans will be able to buy a three show pass for $49.99 and a single show ticket for $20. For more information you can visit the band’s web site: www.motioncitysoundtrack.com and the venue’s web site: www.lincolnhallchicago.com

Tagged as Commit This To Memory, Epitaph, Epitaph Records, Estrella, Estrella Online, Even If It Kills Me, I Am The Movie, Motion City Soundtrack

BRING ME THE HORIZON ANNOUNCE US TOUR 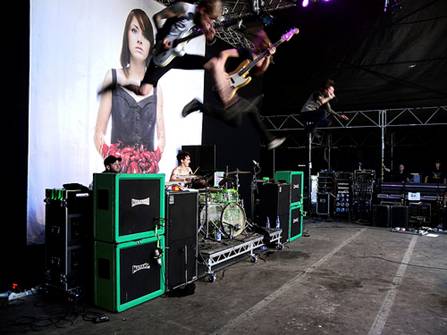 Bring Me The Horizon will be heading to the US for the fifth time and have just announced a full co headline US tour with legendary American Metalcore act EVERY TIME I DIE on the EPITAPH TOUR Sept 8th – Oct 11th 2009.

Bring Me The Horizon have also announced JONA WEINHOFEN, formerly of BLEEDING THROUGH and I KILLED THE PROM QUEEN as their permanent replacement to departed guitarist Curtis Ward, who left the band in March 2009.

Tagged as Bleeding Through, Bring Me The Horizon, Curtis Ward, Epitaph Records, Estrella, Estrella Online, Every Time I Die, I Killed The Prom Queen, Jona Weinhofen

In support of Shudder, Bayside will be going on a fall tour (Involuntary Movement Tour) with The Status, Valencia, and The Matches. Tickets are on sale now: bayside.ducatking.com.

Shudder will be released September 30th on Victory Records.

A mainstay on the road, with international appearances spanning clubs, arenas and major rock festivals, CHIODOS has announced their latest tour: a co-headlining fall U.S. trek with Motion City Soundtrack. Set to kick off September 22 in Louisville, KY, the band will bookend the tour with headlining shows across the continental U.S., Alaska and Mexico. Tickets for the tour go on sale to the public Friday, July 25, check www.myspace.com/chiodos for more information.

CHIODOS have also announced they will release a special edition of BONE PALACE BALLET due out this fall; the CD will include brand new songs and a 30-minute teaser of their upcoming concert DVD, title TBA, coming in early 2009.