A message from The Wonder Years’ frontman Soupy, in efforts for promotion of their new album, Suburbia, I’ve Given You All And Now I’m Nothing, via Hopeless Records… 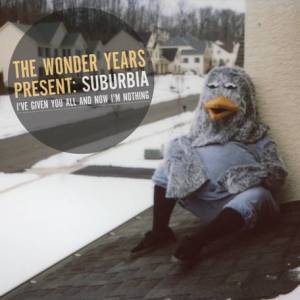 “We’re tired of the same contest over and over again. I’m not interested in anyone emailing us a picture of them with The Wonder Years written on their hand or some shit to win an iPod that I don’t think actually exists in most contests. Instead, we wanted to get creative with it. Hopefully, at this point, if you’re reading this, you’re familiar with Hank. Hank is a pigeon and he hangs out with us. Think of him as a tangible projection of how we’ve always felt about our band, life of the pigeon. He is on the cover of our new record Suburbia, I’ve Given You All and Now I’m Nothing.

We’re sending Hank on a quick US tour. He’s going to appear in ten cities for a few hours at a time. If you follow him on twitter (@HankthePigeon) you will get the scoop on where he’s going to be and when.

Property of Zack is going to be hosting the blog where you’ll get updates from Hank on the road as well as photos, clues, etc. Hank will be twittering clues about his exact location during the time where you need to go and find him. When Hank comes to your town, you’ve got to track him down and say what’s up. You snap a few photos with him and you’re on your merry way with some cool prizes.

The prizes are as follows:
1. The first 4 people to find Hank in each city will receive a copy of the Don’t Let Me Cave In 7″ on orange and clear swirl vinyl. This color is limited to 100 copies and you can ONLY get it by finding Hank. It’s never been for sale and it won’t be until someone needs to pay their rent and flips it on eBay.

2. Everyone that finds Hank will receive and exclusive signed TWY poster featuring scans of the Polaroids we used for the album artwork. Mitch Wojcik took the photos and he’s staggeringly handsome. Trust me.

3. Everyone that finds Hank will be entered to win two guest spots to your date of Warped Tour this year.
That’s the long and short of it. We wanted to do something different that got you out of your computer chair and involved. I hope you have fun with it and when you see Hank, tell him I said what’s up.” – Soupy

Tagged as Hank, Hank The Pigeon, Hopeless Records, Suburbia I've Given You All and Now I'm Nothing, The Wonder Years

Head over to http://www.altpress.com/aptv/video/exclusive_we_are_the_in_crowd_both_sides_of_the_story_video/ to view the EXCLUSIVE AP premiere of We Are The In Crowd’s “Both Sides of the Story” music video.

The Poughkeepsie, NY pop-rockers are on the road now with Hey Monday, Cartel, The Ready Set and This Century.

We Are The In Crowd’s debut EP, Guaranteed To Disagree, is out now on Hopeless Records.

For the latest We Are The In Crowd tour dates, visit:
http://www.myspace.com/wearetheincrowd
http://www.hopelessrecords.com

The Wonder Years ‘The Upsides’ news!

The Wonder Years have announced the re-release of The Upsides, the band’s restless diary of growing up, getting out and making the best of what you have. Arriving September 21 in stores and online everywhere, this re-imagined version of The Upsides not only has a new face to it… it also has 4 new tracks that we’re sure you’ll have on repeat. Wanna check out the CD? Watch as Soupy (lead singer) walks you through the new artwork http://www.youtube.com/watch?v=6F4sF3bIBdo

In addition to the standard CD, we’ve created a very special limited edition fan pack that includes, a Wonder Years lunchbox! Don’t worry, it’s filled to the brim with everything you could possibly need… a Hopeless & Wonder Years button pack, a Wonder Years poster, a very necessary lunch lady shirt, and because we know you deserve it, a hand signed, and numbered suspension notice.

You can find more information on that at http://hopelessrecords.com/thewonderyears/

A full U.S. tour with Four Year Strong this fall awaits these soldiers of the road. Not to mention a stint with pop-punkers New Found Glory later this month, before they head down under. Full tour schedule can be found here http://myspace.com/thewonderyears.

The Upsides
1. My Last Semester
2. Logan Circle
3. Everything I Own Fits In This Backpack
4. Dynamite Shovel
5. New Years With Carl Weathers
6. It’s Never Sunny In Philadelphia
7. Hostels & Brothels
8. Melrose Diner
9. This Party Sucks
10. Hey Thanks
11. Washington Square Park
12. All My Friends Are In Bar Bands
13. I Was Scared and I’m Sorry
14. Dynamite Shovel (Campfire Version)
15. Logan Circle: A New Hope
16. We Won’t Bury You

This morning Phoenix rockers Anarbor debuted the video for their track “Gypsy Woman” exclusively on mtvU and mtvU.com. The track is off their debut Hopeless Records full length, The Words You Don’t Swallow.

The video can be viewed exclusively at http://bit.ly/GYPSYwoman.

Anarbor are currently out on the 2010 Vans Warped Tour.

We Are The In Crowd release new song!

Hopeless Records’ We Are The In Crowd have released a new song from their upcoming EP titled “Both Sides of the Story”!! The song is available for download here! And you can stream it exclusively here through Glamour Kills! The upcoming EP Guaranteed to Disagree drops on June 8th. Make sure to pre-order your copy now and don’t forget to check out the band on Warped Tour this summer.

We Are The In Crowd news!

We Are The In Crowd are excited to announce the details of their upcoming EP, Guaranteed to Disagree. The first single, “Lights Out” is now available for stream and purchase!

The debut is set to release June 8th.

Get the track here: http://bit.ly/aYIuq6

Fans first chance to pre-order the upcoming EP is through Glamourkills.com. For $24.99, each EP comes bundled with an exclusive Glamour Kills/We Are The In Crowd collaboration tee, just to make it even more special. Make your friends jealous and pick up your copy today!

We Are The In Crowd’s record release show is set for Saturday, June 12 at The Chance Complex. More details to come… don’t miss your chance to catch a great show that features Every Avenue, The Dangerous Summer, Sing It Loud, There For Tomorrow and many more! The band will be hitting the road this summer on the entire 2010 Vans Warped Tour rocking the Skullcandy stage. The band is currently out on the Bring Me Home Tour with The Morning Of and Sparks The Rescue, before they head out on the Avatour with You, Me, & Everyone We Know, Breathe Electric, and Stay. All tour dates are listed on the band’s official Myspace.

Guaranteed To Disagree Track Listing
1. Carry Me Home
2. Never Be What You Want (Featuring Will Pugh from Cartel)
3. Both Sides of the Story
4. Lights Out
5. We Need A Break
6. For The Win
7. Calendar Pages

Tagged as 'Guaranteed to Diagree', Avatour, Breathe Electric, Estrella, Estrella Online, Every Avenue, Glamour Kills, Guaranteed To Disagree, Hopeless Records, Sing It Loud, Stay, The Dangerous Summer, There For Tomorrow, Vans Warped Tour, We Are The In Crowd, You Me & Everyone We Know

The 2010 Sub City Take Action Tour, presented by Hot Topic, kicks off today in Atlanta, GA! The 2010 lineup features We The Kings, Mayday Parade, A Rocket To The Moon, There For Tomorrow, Call The Cops, and Stereo Skyline. The annual nationwide charity tour, now in its ninth year, raises funds and awareness for youth involvement in charitable action.

In an effort to make a difference throughout the Take Action Tour, Sub City along with DoSomething.org and Driving For Donors have organized a series of charity events that allow bands to participate in local communities and take action. The bands will be visiting children’s hospitals in Seattle, Salt Lake City, Denver, and Texas for special meet & greets with patients, as well as an acoustic performance to brighten their day.

In addition to off-site charity events throughout the tour, We The Kings, Mayday Parade, A Rocket To The Moon, There For Tomorrow, Call The Cops, and Stereo Skyline will be making special signing appearances at select Hot Topic stores. Dates can be found below.

To date, Sub City, a registered 501c3 organization, has raised nearly $2 million for various charitable organizations; much of that a result of Take Action, driving home the fact that we can all help bring forth change and that making a difference can be as fun and easy as buying a CD or concert ticket.

For more infomation, check out: www.takeactiontour.com

Hopeless Records, through its non profit organization Sub City, is pleased to once again bring you the Take Action Tour. This year the tour will spotlight Patrick Pedraja and the need to get people signed up for the National Marrow Registry. Presented by Hot Topic, the tour will feature headliner We The Kings, in addition to Mayday Parade, A Rocket To The Moon, There For Tomorrow, and Stereo Skyline (on select dates). The annual nationwide charity tour, now in its ninth year, raises funds and awareness for youth involvement in charitable action. The tour will kick off in Atlanta, GA on January 25th and end on March 2nd in Dallas, TX. Pre-sale tickets can be bought now at: tixx1.artistarena.com/takeactiontour.